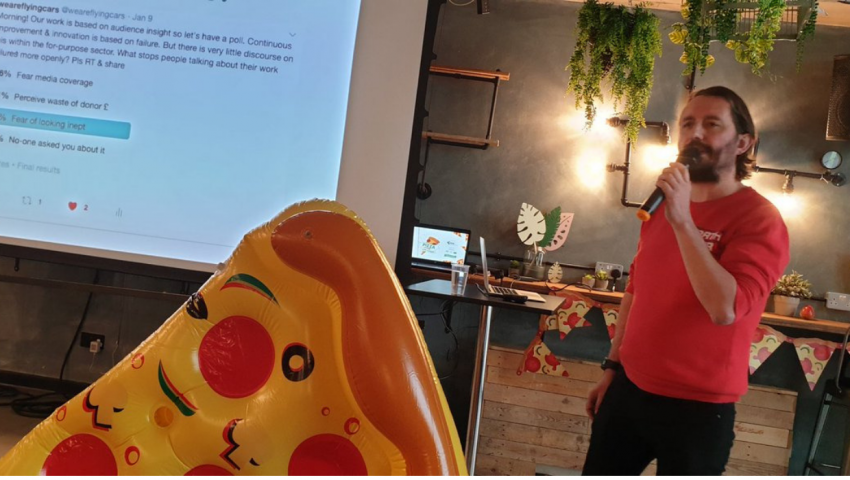 There IS safety in numbers
Guest Article by Henry Rowling from Flying Cars
I had the great pleasure of speaking at the inaugural Pizza for Losers event in London. The event had over eighty delegates eager to hear the various tales of woe delivered candidly by a diverse range of speakers from all backgrounds and sectors of working life. One of the reasons for creating these events is to normalise talking about failure so that we can all, collectively improve as a sector and deliver more impact for our organisations. Only by building a supportive culture that values and learns from failure, can we transform the way we engage with our various organisational stakeholders. I personally enjoyed hearing all the presentations once my bit was done (mercifully I was first up) - the content was curated beautifully so everyone had a totally different angle - from the deeply personal to the hilarious and totally leftfield.
In my slot I spoke about some of my own personal failures within my life and career; and during the course of my 20-odd minutes it transpired that everyone present had failed multiple job interviews. In fact, when I put the question to the audience and asked all those to raise a hand if they've ever failed a job interview, it was extremely unifying to see that every single person in the room was waving a 'f*ck it, it's a safe place' defiant arm in the air. Often, we beat ourselves up about things that have not gone well and hold ourselves to the highest, impossible-to-achieve standards, but lurking deep within each and everyone one of us are many tales of when we have personally failed at something we were trying to achieve. We need a more open and honest conversation about this. During my session I crowd sourced some stories of failure from the delegates via WhatsApp - and here - presented for your delectation - are some of those stories (all contributors have given their consent for them to be published). A lot of the errors were familiar to me - hopefully you can also identify with them!

Who hasn't discovered a proofing mistake in their time? If you’ve worked in producing any content long enough - you’ll know that sickening feeling you get when you open your glossy brochure/direct mail pack/web page only to spot some terrible mistake glaring you right in the face. “I was working with the Rugby Football Union on their brochures. Proofed the brochure so many times but somehow it was sent out to 10,000 people with Twickenham spelt wrong on the front cover! We had to claim against the agency’s insurance to pay for it to be reprinted. I learnt that you must always get someone who hasn’t worked on your project to proof something before it goes out. But also it’s not life or death and I didn’t get sacked.” Fiona Lishman, Working Progress

You’re being audience-led - you’re listening to feedback - but it still doesn’t work. “After listening to supporter feedback at the Edinburgh marathon I convinced my charity to invest a chunk of money in a charity village presence. Add in four staff, travel, accommodation, equipment, snacks etc. Anyway - massive fail - one runner out of 79 came to see us.” Anon

The one where you're in a massive hurry

More haste, less speed is a cautionary tale best heeded. “I was in a hurry for a business networking event, realised that I ran out of business cards - quickly created a basic business card, printed on office printer, all looking good. Only after the event and giving out all my cards, I noticed that I forgot to include my email and telephone.” Tanya

The not adding up one

Doesn’t matter how many times you add up column A & column B - check again! “I spent a month preparing an important fundraising bid & budget for £60,000 from a trust that loved our work and supported for years. We would never have known - but the Trust phoned us up to say they ran the numbers and wanted to confirm if we were applying for £54K or £60K. After a quick tweak we got the money. Lesson learned - good relationships allow room for mistakes. And check your budgets” Anon

The empty room one

You send out event invites, eagerly awaiting the flood of replies and nervously checking your post room twice a day. “I wanted to regionalise our legacy fundraising events and we had some services in Brighton, an area that worked well in a previous charity I worked for - so jumped at the chance to do an event there. However we didn’t have the right supporter base in the area and only 6 people responded so we had to cancel the venue and lost the deposit. I still met the supporters in a cafe and built up good relationships, but the legacy ask didn’t come across as strongly. I learnt we need to be more strategic and look at where our supporters are first before planning an event in a new area” Katie Wimpenny, St Mungos

It’s complicated that CRM with ALL the segments. “Sent a price change email to 6k members that only affected 300. As soon as I worked out that I had sent to the whole database I sent two more emails to the two groups to clarify. After that I learnt how to use the CRM system.” Bobi Robson, Bobi Robson Digital

The proposal by numbers one

Ever received a glitzy, beautiful looking proposal from an agency, only to spot the name of another charity at the bottom in the footer? Surely not… “At the start of my career I was working in business development for a digital agency and had created an awesome proposal template, where I could essentially switch out the company name, except I forgot on this instance. I’d built up the rapport, done a lot of the groundwork but it was clear the proposal was fairly generic and not personalised at the point of presenting it in a big boardroom with my bosses. What I learnt - what it felt like to make a mistake that had consequences within work, the importance of attention to detail, go the extra mile to personalise communications, do less but do it better, quality over quantity , and actually admit the mistake and move on.” Si Muddell - Scope

My personal favourite by some distance. Can you relate? “When I worked in the advertising world, we were working until the early hours to get a client pitch completed ready for a 9am presentation. No time to get home so curled up to sleep on the giant bubble wrap in the production office. Had a great sleep - but woke up to find large bubble shaped red rings all over - turns out I’m allergic to the plastic in bubble wrap. So had to pitch looking as if I had an unpleasant and highly contagious disease” Vanessa

Thanks to all those that gave their stories willingly. Some were too personal to share. I’m sure there are hundreds of other tales out there. Get chatting peeps. Flying Cars is an insight, innovation and strategy collective for charity and cause-driven brands. You can contact Henry at hello@flyingcarsinnovation.com. KEDA Consulting are a team with vast and varied experience across fundraising income streams. If you want some support through your challenges or help to overcome previous fails, we’re here for you. Get in touch to start the conversation at hello@kedaconsulting.co.uk.